Luke and I became Catholic in July 2020. The story of why we switched from Protestant to Catholic is a long one, but when we moved to our Ivy Farmhouse, we were both determined to make a Catholic home. We felt even more right about our decision to become Catholic and move to this house in particular when we found out that the previous owners are also Catholic. One of the first things I began to do when we moved in was to decorate with some of our Catholic things, in particular, our crucifix. In this post we are going to discuss where to hang your crucifix in your home, and why the crucifix is so important to Catholics.

Before I became Catholic, I always found the crucifix hard to look at. Most Protestants have no problem displaying crosses in their homes and would rather not be reminded of Jesus’ agony. Once I became a Catholic, I realized that without the crucifixion, the birth of Jesus would have been pointless. I even heard someone say that a cross with Jesus is just a torture device.

So, why do Catholics hang the crucifix in their homes? Catholic Education so simply states that hanging a crucifix is

And it’s so you can look at it in terrible, painful times and see that pain is never empty and meaningless because is full of the company of Christ.  And it’s so you can remember that the cross, that instrument of torture, is occupied — not by you, but by the one who took your place for no good reason at all except that he loves you.”

In a culture that increasingly rejects Christ, hanging the crucifix is a symbol of taking that rejecting and throwing it out the door. Hanging the crucifix on our wall gives us pause, to stop and to remember that Christ died for us, and that salvation is the ultimate gift.

Crucifix Over a Door

Many Catholic homes display the crucifix in a main area, especially over a door. Hanging the crucifix in a spot where it is visible either when people enter or leave the home is a good thing to do. The symbol of Christ’s body on the cross will serve as a daily reminder to pray and to thank God for his mercies.

Our homes serve as a domestic church, and are therefore a holy place. The crucifix is a prominent sign of Christ’s sacrificial love inside of our domestic church.

My husband bought this crucifix in Mexico long before either of us became Catholic. It has hung on a wall in every home we have ever lived in. We decided to place it beside the door we use most frequently to enter and leave our home. I love that I can see the crucifix as I walk down the stairs every morning. I feel such peace when I see it.

Catholics also often hang a crucifix in each bedroom, particularly over the bed. My husband and I have ordered a second crucifix to go over our bed. It will serve as a constant reminder that Christ conquered death and evil, and that He is the head of our marriage.

We plan to add a crucifix to each bedroom in our home as a reminder of Christ’s sacrifice.

Welcome to Our Ivy Farmhouse! 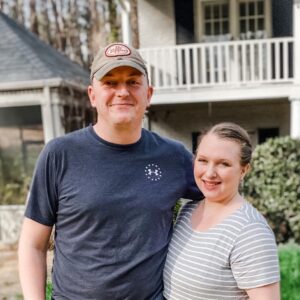 We are Luke and Joanie. We are Catholic converts with seven kids and just purchased our dream home on seven acres. Follow along with us as we DIY and renovate our ivy farmhouse.